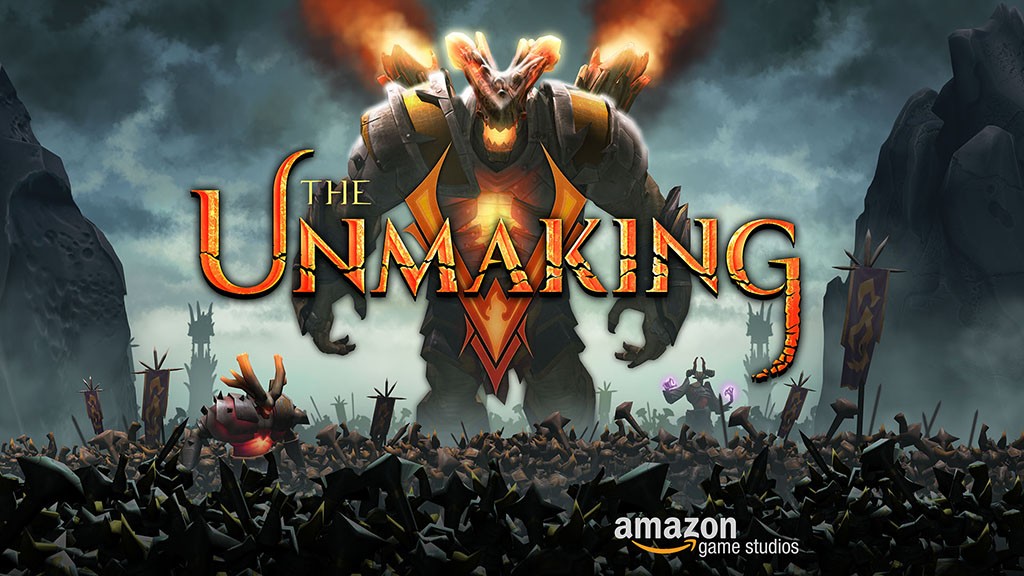 The Unmaking was developed to showcase Amazon’s AppStream service by streaming cloud rendered high definition, PC quality graphics to a tablet device. In this game, the player defends their castle against “waves” of massive enemy hordes. With touch-based controls, you command various mounted weapons, dragging your finger to aim your shots out from the castle wall.

My primary responsibilities were as the team’s Sr. Designer, prototyping player input, AI, game mechanics, and play interactions. In production, I moved to designing and building all of the layouts, scripting, and configuring play. I also did early enemy prototyping and collaborated with UX on controls and player feedback systems.

Below are my initial explorations into play/combat mechanics as well as populating the scenes with high volumes of characters.
Following a week of prototyping, we would gather feedback and combine the most promising ideas into a playable prototype.

Enemies were designed to bee seen clearly in their approach and with their attacks patterns. The health indicators were an exploration in detecting damage to the player, as well as the health of distant towers (descending flag concept) that you may be defending. These would be the first of many prototypes that would be built throughout the project.
Writing Code – Unity / C#

State Machines: The first prototype involved setting up some basic state machines and spawn patterns for instancing enemies and their attacks.

HUD  /Damage: I also wrote additional code for HUD and in-game damage indicators so we could tell which enemies were doing the most damage.

Much of this prototype code would be reused and extended throughout the project.

One of the challenges with The Unmaking was achieving the element of surprise. Enemy exposition was generally limited to spawning out of sight or at great distances. We could “magically” spawn enemies closer to the player, but it often felt “cheap” or unfair to do so. Enter the “Vomitous”…

Testing an idea for a large, physical enemy creature that “vomits” other creatures onto the battlefield. Its initial appearance was meant to provide a very memorable and intense moment while potentially giving some back story as to where these creatures were coming from. Initially, a Vomitous could be shot and forced to retreat. Once the player became stronger they could be taken down much sooner, enforcing the sense of player progress.

To handle the volumes of enemies required and remain performant, enemy pathing was implemented as basic A*. This meant that enemies would always find the shortest, most direct route to the player. This presented some significant design challenges.

Below are my early grey box versions for each level that went into testing.
In order to create deliberate terrain structures, I mapped the gray scale values from Unity’s heightmap to Photoshop. This enabled me to leverage Photoshop’s tool suite to create more interesting maps, much more quickly and predictably than using a terrain editor. 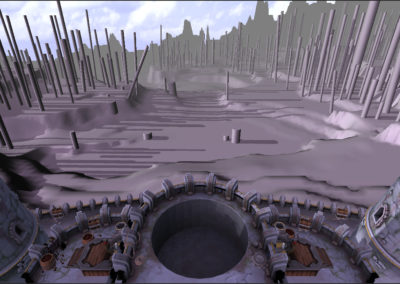 A dominant center line. Small enemies filter through he trees while larger enemies topple them like dominoes. Pathing calculations proved troublesome and this level was cut. 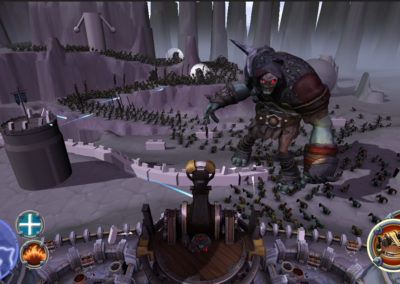 A continuation of the forest, this level maintained its switchback motif and made it into the game after leveling the forest in the background. 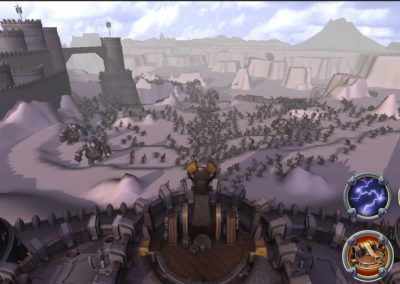 A large backfield game players time to plan. A steep ascent made enemies appear to disappear and pop up right in front of you. 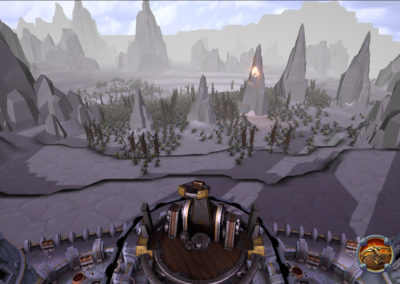 This level is almost unrecognizable but its intent is clearly preserved. A large area with vertical obstructions provided cover for enemies. 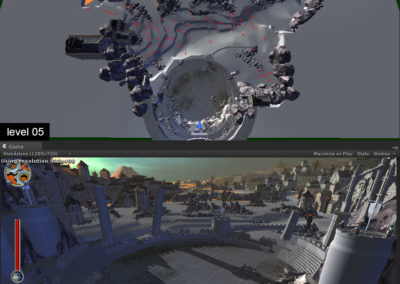 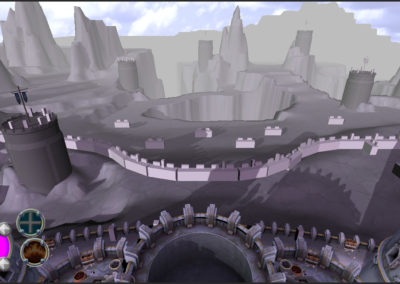 Some of the land bridges were replaced by destructible stone bridges. This level was among the lease altered from its grey box. 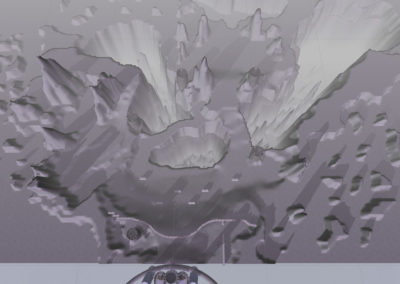 A view of the pathing required to build a variety of combat scenarios. An overhead view was considered for the game, but was cut due to performance issues. 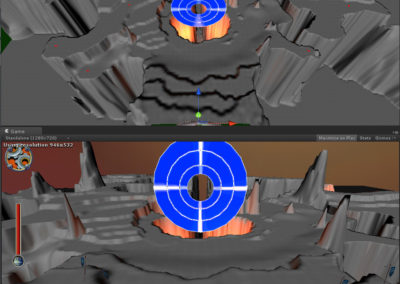 An editor view showing the complexity of the heightmap. Some paths are obscured by the central puzzle element, giving players intermittent sight lines.

Qualitative research began early in the project with groups of experienced tablet gamers ranging from ages 18-32 and consisting of primarily male participants. KPI’s were based on the PENS model and included ratings for Competency, Autonomy, and Relatedness.

Competency: The intrinsic need to feel effective in what we are doing. (Feeling ineffective has a negative psychological impact).
Autonomy: The experience of volition or choice in one’s actions. (does not include forced choices).
Relatedness: Intrinsic desire to connect with others in ways that feels authentic and supportive.

Initial testing revealed that scored for competency were particularly low for similar games in this genre. Players mentioned things like “too repetitive” and having “trouble with the controls”. Issues with cognitive load were also observed and players expressed a sense of being overwhelmed.\

My first goal was to address the player controls. The early build used the Angry Bird’s “Slingshot” where the player taps on the weapon, drags back, aims, and then releases to fire the shot. But our game was in 3D space…

I quickly prototyped a new control scheme and gathered first impressions from the team, stakeholders, and new players around the office. In all cases, players found that the new controls were immediately intuitive and easy to use. 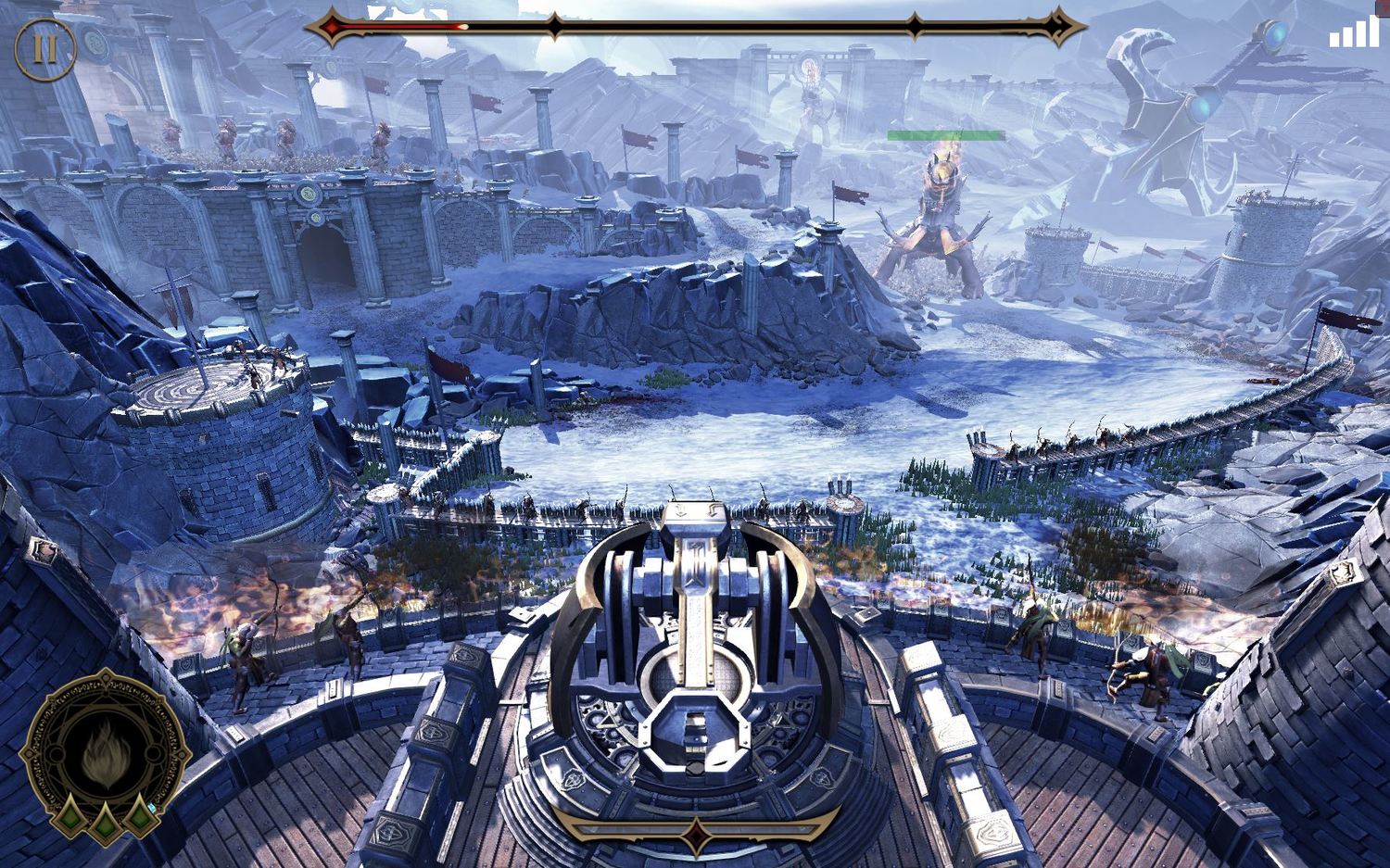 Designing for a stationary player can be quite challenging. It was helpful to think of the experience as if the level was coming toward you and apply some of the same FPS concepts. How do we prioritize threats and make meaningful choices? What kinds of expositions can we leverage to bring enemies into play? What types of cues can we use to grab the player’s attention or lead their eye?

Destructible environment to crush and reroute enemies. Explosive barrels tossed into scene to help the player. 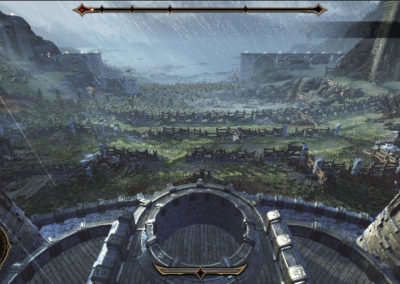 A bowl-like layout supports a large, physics based boulder weapon. Play the sides of the level while leaving flow-control wall structures intact. 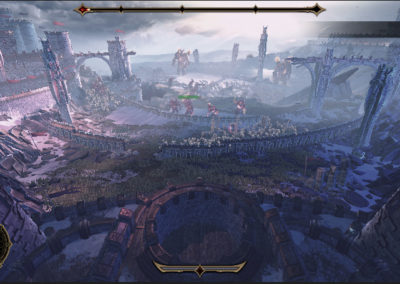 The left and right archways allow for surprise attacks. Enemies in the distant center can quickly become a serious threat. 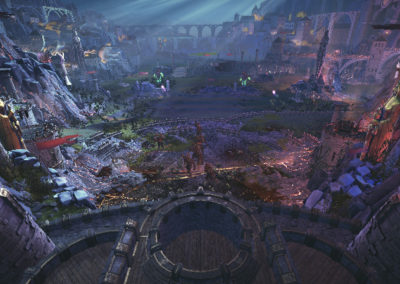 An intense battle arena with a wide open center and numerous hidden openings along the left and right walls. 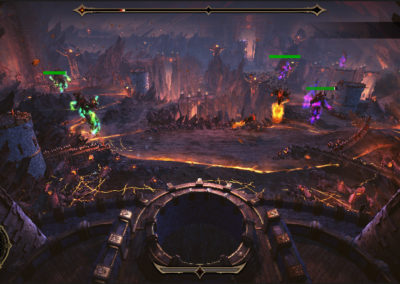 Four bridges over a massive ravine. Two bridges are destructible while the ravine allow for surprise attacks by flying enemies. 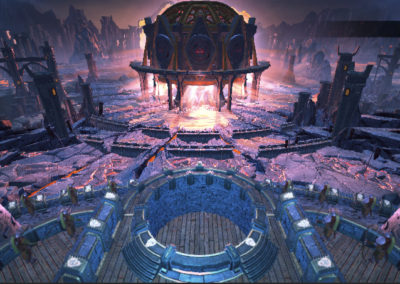 Enemy routes change over time, creating a wide variety of attack angles. A central puzzle structure must be destroyed to end the game.

While day and night cycles and weather FX kept the levels visually interesting, I relied on heavily scripted scenarios to keep play interesting and exciting over time. Some techniques included: dynamically changing sight lines, destructible environments that crush enemies and alter the flow of play, shooting exploding objects launched onto the battlefield, and balancing periods of uneasy silence with ambushes and coordinated enemy attacks. Combat was kept fresh by using clever combinations of enemies and leveraging each level’s unique design to full effect.

As is common with designing the “first level” of any game, this level went through more design iterations than any other level in the game. Below is a brief overview of how the first level evolved over time. 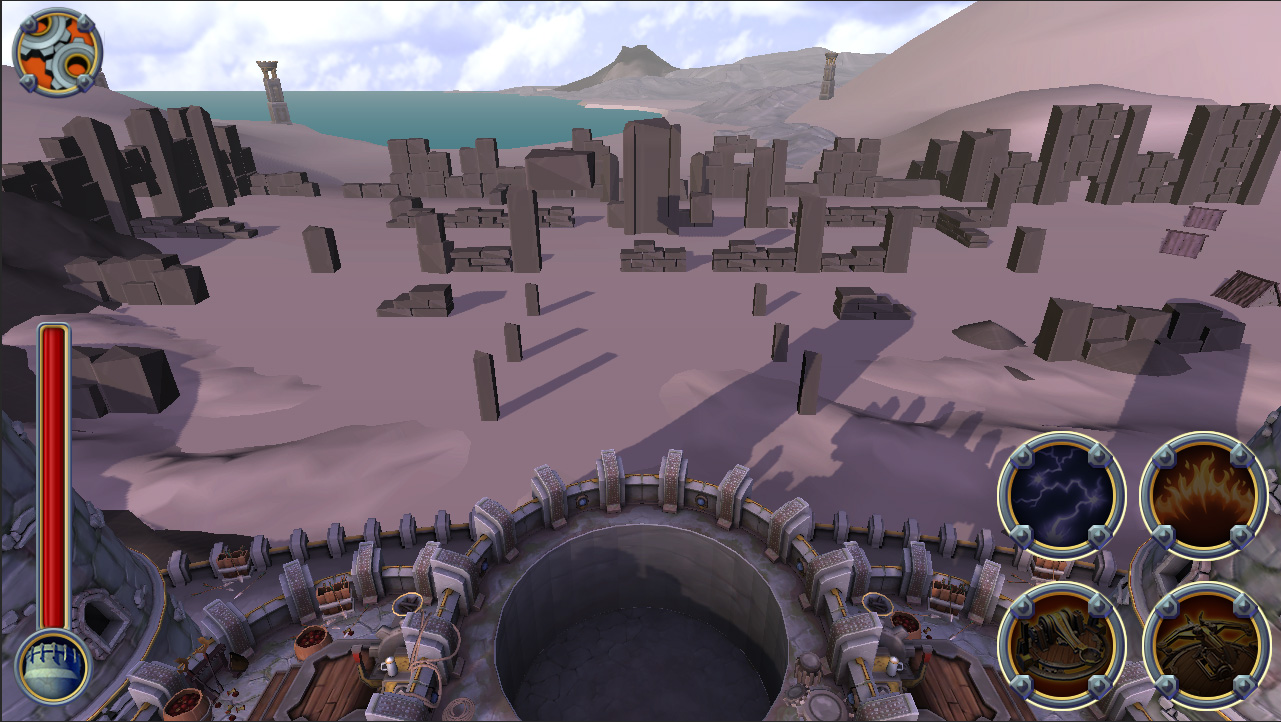 As the first level, its primary function is to introduce the game’s mechanics in an exciting and engaging way, without overwhelming or frustrating the player. The layout presented above was designed to give the player plenty of time to see enemies coming before they were actually a threat.

Playtesting revealed that the level was too overwhelming as large numbers of enemies poured into battle from multiple locations. Even though enemies were of a weaker type, the perceived threat was significant. Combined with learning the controls, this proved frustrating for most play testers.

To address these issues, I closed off some wall segments, forcing enemies to take a longer path and funneling them into fewer areas. This gave the player more time to think and target enemies with confidence. I also worked with an AI developer on enemy-only breakable geometry. Areas marked “Blaze” can be broken by larger enemies; shortening the AI pathing to the player. (Larger enemies were removed from the early game and would return in later play, after the player had learned to use their weapon.) 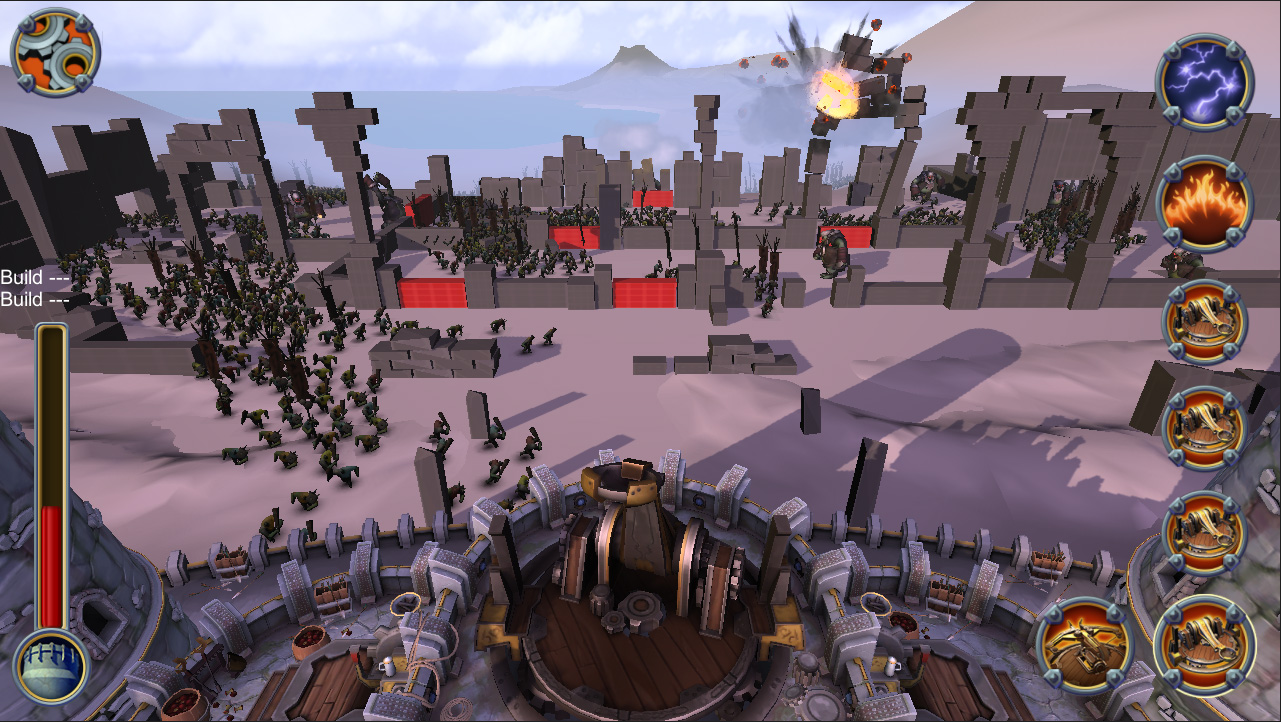 Playtesting showed significant improvement in cognitive load after flow control adjustments made in the previous pass. Now, we were in a position to start increasing the difficulty over time, and bring more interactive elements into play. The following changes would occur over several passes, each with more testing and adjusting. 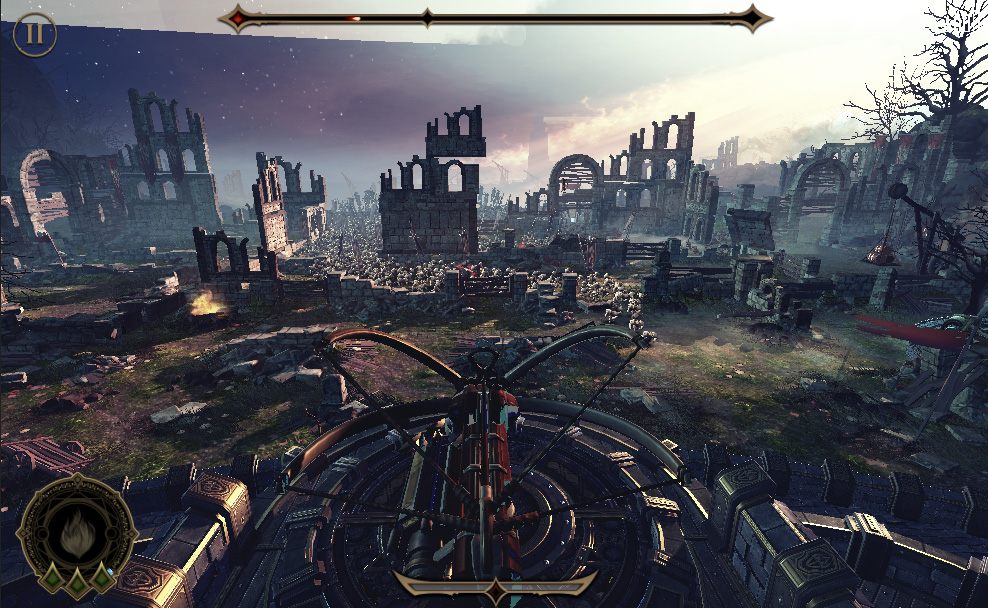 Once the difficulty progression and dynamic environmental elements passed through testing. We were ready to hand the level to the art team. Artists have been involved throughout the entire design process and we all understand how the level is intended to play. This was an important point in case the geometry was accidentally moved during development.

Following an art pass, the level was ready for decorative scripted events, such as large enemy projectiles smashing down your outer walls to reveal the on coming enemies. (these were non-blocking assets) This process continued until the art was finalized and the level was retested.

After the initial release, I was tasked with delivering a design for a more immersive, and engaging update. To do this, I teamed up with User Research again to determine how our game was performing relative to the the PENS (Player Experience of Need Satisfaction) model.
I then focused the design and aligned the team around increasing PENS scores; specifically Autonomy and Competence, while improving engagement and replay value.

To do this within budget, it was critical to reuse as many assets as possible and within the limits of the current technology.

Below is a gallery of mission mockups 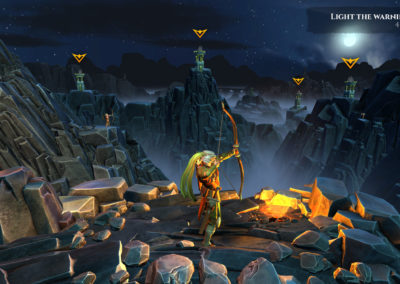 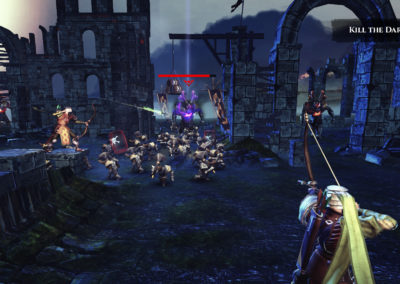 Opens up possibility for alternate positions and goals around the battlefield 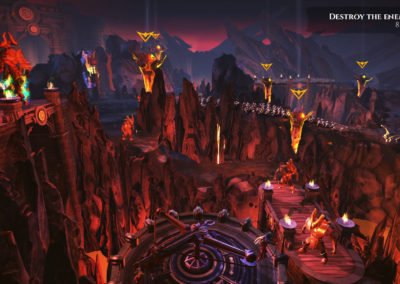 Clearly shows progress towards a goal 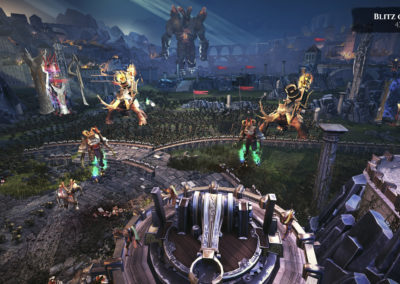 Alternate gameplay possibilities open up when sheer quantity is the goal 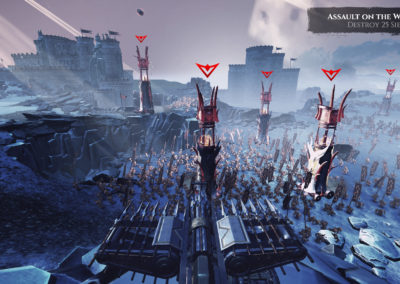 Kill # of a specific type

Focus on certain targets while surviving against all others

As an archer on the ground, this scaled up enemy presents a more serious threat. 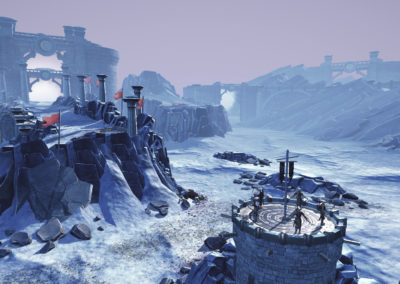 Experience the level design up close, for a greater dramatic impact and more variety in play. The Pylon level was made to introduce players to their new role as an archer and familiarize them with the new mission.

Our design sessions produced a rough play sequence which was used to assemble the first archer mission prototype. Moving forward, we would continue iterating on timing and adding interactions until we felt really good about the overall experience. 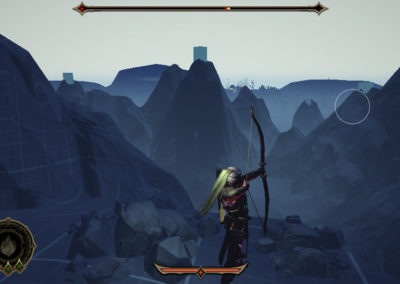 Light the pylons to report a massive horde moving through the pass, toward the town. 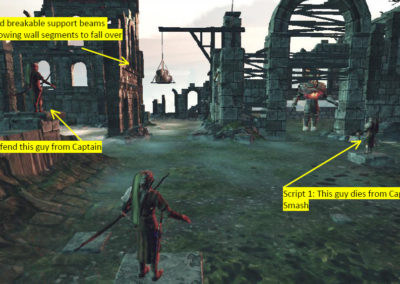 First scripted encounter with a “Captain”. These enemies create paths by smashing things, including people.

Establish that Captains have many hit points. You’ll have to level up to take them out more quickly. 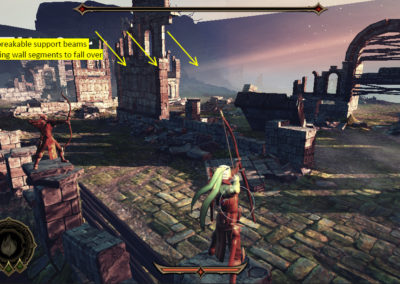 Fighting alongside another archer, you take out captains and cut the horde down until… 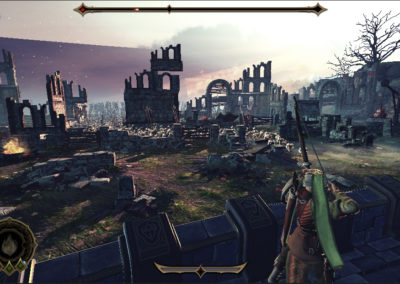 A huge wave overwhelms the battle field and you must fall back to fight from the wall.

A massive projectile slams into the castle, wiping out your allies. Ears ringing, camera wavering, you take control of the massive weapon and end this battle victoriously. 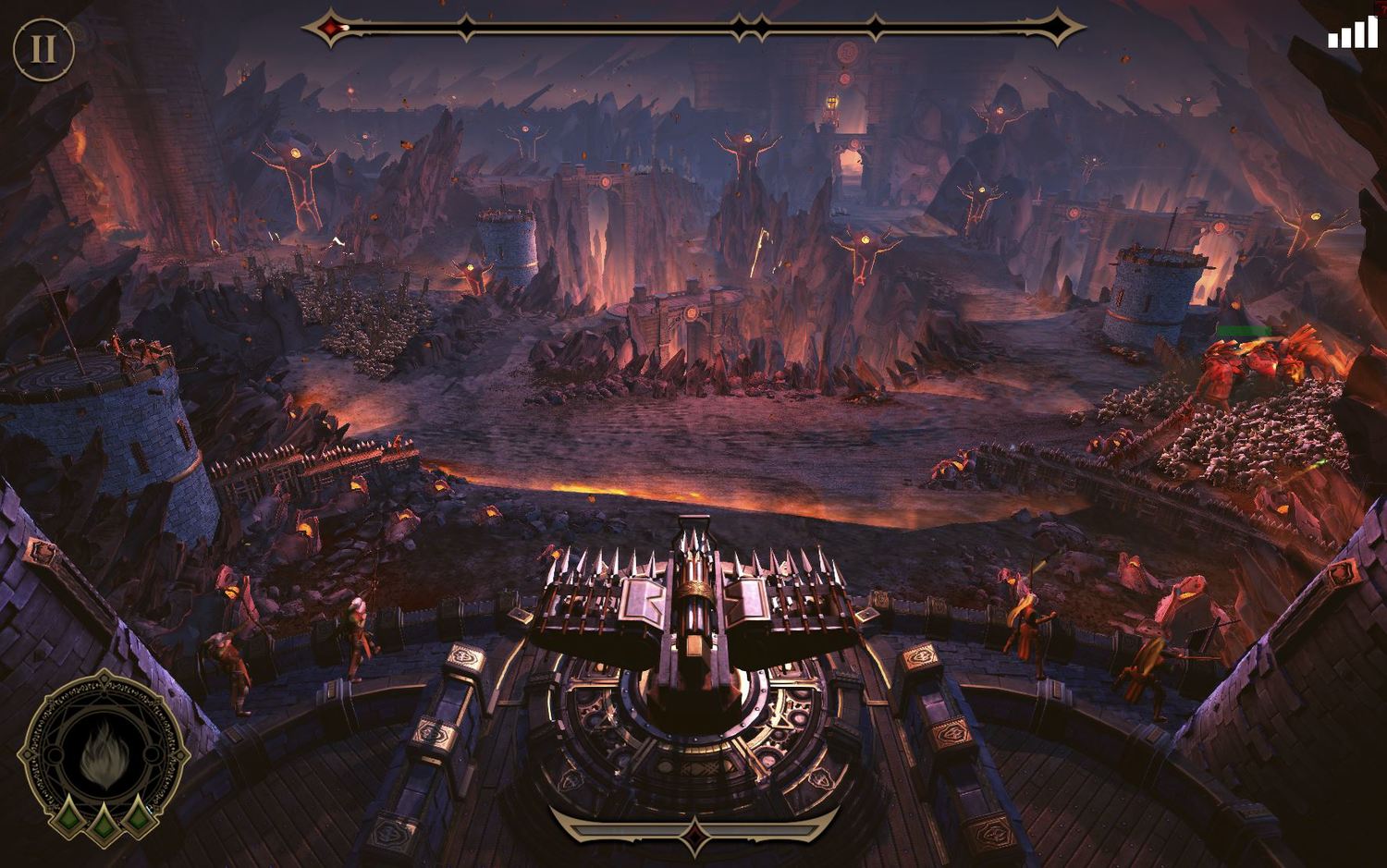